“A crowd whose discontent has risen no higher than the level of slogans is only a crowd.  But a crowd that understands the reasons for its discontent and knows the remedies is a vital community and it will have to be reckoned with.  I would rather go before the government with two people who have a competent understanding of an issue, and who therefore deserve a hearing, than with two thousand who are vaguely dissatisfied”. –Wendell Berry, The Art of Commonplace: The Agrarian Essays

Governments that lead without active citizens lead blindly.  Both government officials and citizens lose.  Talking about citizen action is much easier than achieving it.  Further, engagement is only part of the puzzle.  Engagement that brings positive change is different story.  Various structures have emerged over the years to be means towards action.

In a recent project done with a rights-based development organization we created tipping points for community action and a theory of change (ToC).  The tipping points and ToC came from extensive grounded research.  We developed the following tool as a small piece of the larger research design to understand means to people’s action.

Means for action. Although dated now David Korten (1990) developed what he called the “Strategies of Development – Oriented NGO’s: Four Generations” (113-132).  He developed the four generations from research he conducted in various NGO’s.  He researched what strategies (means) Non- Government Organizations (NGO’s) use to create citizen action.  NGO’s strategies changed as their organizations matured.  As NGO’s developed they realized simply responding to need was not enough to reach their desired change.  He developed the stages of Relief and Service leading to Community Development.  These stages lead to Sustainable Systems Development which led to Peoples’ Movements (Table 1).

Service / Relief: Service and Relief is when people bring resources (social and physical) on a continued (service) or short-term (relief) basis to meet the need.

Movement: Movements are a body of loosely connected individuals, groups, and organizations that promote a similar development ideology.   Movements create development in that they change how people view the world and interact with one another.  Movements change the social fabric of societies.  They create change through getting a tipping point of people and organizations to promote a similar ideology from various platforms. Using the Means of Action to Map Citizen Action in Context.  As a small piece of a larger project we had civil society leaders (representing registered and unregistered groups) rank the time their organization or group spent in each strategy.  They then ranked how much time they sensed other similar organizations spent in each strategy.

Ranking. We developed a simple tool for ranking.  Using the below diagram we explained each NGO strategy. After explanation we ensured people understood the strategy by gaining feedback and clarity.  Respondents used ten small objects (paper clips or rocks) to rank how much energy their organization put into each strategy.  They then ranked how much energy they sensed other NGO’s put into each strategy.   The rank was recorded in correspondence to each participant.  After the ranking people told stories of times they saw these strategies work and not work.  These stories became a piece of the rich data that developed the research and eventually turned into the theory of change. 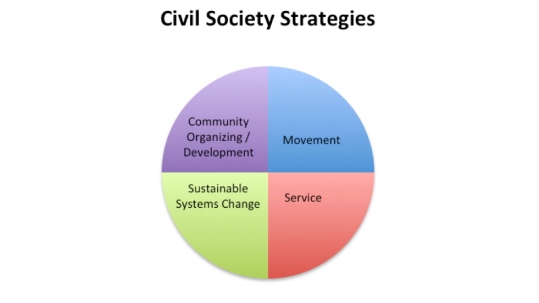 Showing the results.  As an example the below -fictitious- diagram is helpful to present and compare the results.  The example below shows the tool being used in three comparable locations.  Having the data recorded by location is ideal to understand different levels of strategy development in different geographies.  Further, connecting the stories that were collected to the same geographies ensures the data matched with geography.  The stories and the estimated amounts of time used for each strategy is ideal to give a picture of the means towards citizen action in different contexts.

As an example the diagram shows various means of citizen actions in different provinces.  For example in province 1 people use sustainable systems change followed by movement, community organizing, and service.  Province 3 uses service followed by community organizing, sustainable systems change, and movement.  From Korten’s typology province 1 has a more developed understanding of strategies leading towards peoples action than province 3. When combined with rich qualitative data -that analyses various stakeholders view of power, stories of change, and experiences of citizen action- this tool becomes invaluable.  It can be key towards policy and practice to create citizens action and strengthen governance.

One way to improve the research. One-piece of citizen action that is missing from Korten’s typology is groups that actively engage the economy towards people’s well-being.  In the last decade various groups have developed that use this strategy.  These developments were after Korten’s typology.  Depending on location of project this strategy could be a key addition.

About the Author: Dr Matthew S. Will has over a decade of experience in International Development working and living in South East Asia and the Pacific.  If you would like to talk to him about innovative ways for a partnering towards a flourishing society click here.  Other method articles found on the flourishing and disadvantage web-site by Dr. Will are THE MODEL FLOURISHING and Theories of Change: Grounded for Complex Environments.  It is also important to reference Judy Walls who -in the midst of a busy schedule- offered her expertise and peer reviewed the original research design.  She identified the lack in the original design that eventually become the tool described in this article.

2 responses to Mapping the Means to Citizen Action