Resilience is the ability for people to self-organize their capabilities and bounce-back after a shock.   The human capabilities and development approach (i.e. Sen, Nussbaum, Alkire and others) is helpful in understanding resilience in a human centered way.  Connecting capabilities to resilience leads to understanding which capabilities are most vital for people to secure in order to bounce-back and flourish.  This is different from a perspective that places economic development -Livelihood- as the ends rather than the means towards resilience.  This shift may seem subtle but it is substantial in how theories of change, design, monitoring and evaluation of resilience projects take place.  One focuses the end towards economic increase -with an assumption of increase in capabilities- while the other plans for and measures the increase in key capabilities.

Developing the initial framework: This article uses research done in the southern Philippines to show a capabilities view of resilience.  The research was conducted with people who were ethnically Yakan.  These participants were from Basilan, Mindanao, Philippines.  People who live on Basilan face a continued ebb and flow of conflict.  Within this environment the research to captured narratives of participants best moments in life.  A context specific understanding of what is needed for a flourishing society was developed. Further, the flourishing domains were ranked against all other domains to show a context specific, weighted interconnection. The question ‘which domain if missing has the larger impact on your ability to have a good life?’ was asked to create the rank. The rank was used to create a resilience framework that is the focus of this article.

This is what participants said creates a flourishing society in ranked order.

Table 1: Domains for a Flourishing Society 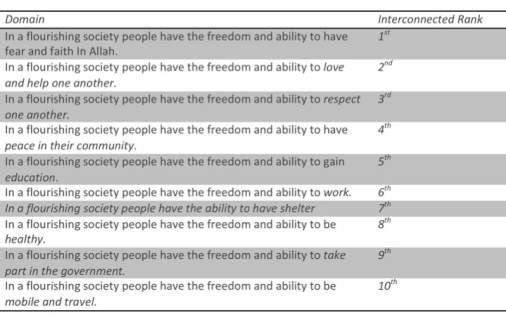 To understand the research method -The Model Flourishing- click here.

One of the more helpful concepts to connect capabilities and resilience is posed by Wolff and de-Shalit (2007).  They pose that some capabilities have larger impact on helping other capabilities develop or shrivel. They call those that help to development fertile functioning (Wolff & de-Shalit, 2007, “Disadvantage and Fertile Functioning: What Do We Know?,” para. 1). They further pose that other capabilities if missing have a greater impact on the entirety of the capability set in creating a downward spiral. They call these corrosive disadvantages (Wolff & de-Shalit, 2007, “7.3 Clustering of ‘High-Weight’ Functioning,” para. 9). Resilience strengthens capabilities that if missing are corrosive disadvantages to move towards strengthing domains that are fertile functioning’s.

Over time through intentional policy, practice and people realizing their capabilities resilience to shock is built (Figure 1). 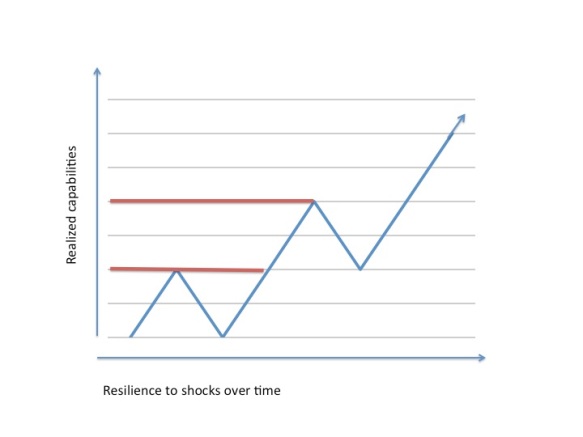 Another concept that is connected to capabilities and helpful for resilience is Human Security.  Human Security poses certain domains are the “vital core” (UN, 2009, p. 6) of what it is to be human. If this vital core is threatened or not realized development can’t take place. The idea of a vital core leads towards the “human security thresholds” (Tadjbakhsh & Chenoy, 2007). If capabilities domains fall below this threshold development is impossible. One limitation of the this specific research is the ranking did not create an exact threshold.  Rather, it created a “un-located” estimate of a context specific threshold.   For conceptual purposes the threshold is within the midpoint of the ranked domains.

Of environments of equilibrium Wheatley (1992) stated,

…equilibrium is the end state in the evolution of isolated systems, the point at which the system has exhausted all its capacity for change, done its work, and dissipated its productive capacity into useless entropy… At equilibrium, there is nothing left for the system to do; it can produce nothing more (p. 76).

The goal of pre-shock development or post-shock recovery should not be towards equilibrium. Equilibrium does not reflect the ever changing nature of people and their environment. Resilience develops capabilities to be dynamic. Capabilities that are dynamic are characterized by disequilibrium. Of resilient or dynamic systems Wheatly (1992) stated,

Faced with amplifying levels of disturbance, these systems [disequilibrium] possess innate properties to reconfigure themselves so that they can deal with the new information. One of their features is system resiliency rather than stability (p. 88).

Capabilities are a part of dynamic systems that are characterized by disequilibrium. Dynamic systems have both attractors and actors that are characterized by self-organizing. Actors self-organize around attractors. People (individuals) and systems (nongovernment and government organizations, families and groups) are actors.  Capabilities are the attractors. Thus, the goal is not to manage the development of capabilities but to create space that will encourage actors to self-organize around the development and protection of capabilities. Resilient people have an external and internal environment that supports self-organizing of capabilities after and before a shock.  Actors have the obligation (moral or legal, depending on the actor) to create an environment of resilience for each other.

As mentioned in Table 1 the question was asked during the research ‘which domain if missing has a larger impact on your ability to have a good life?’ People then ranked every domain against every other domain.  The below figure used the research findings to show from the perception of the Yakan which domains should remain secure to create a system leading towards resilience. The arrows (Figure 2&3) represent actors within the system.  The circles represent attractors which are capability domains. The order and location of each attractor represents the rank of importance towards creating resilience. From the perspective expressed from the participants in this research those lower on the Y-axis are more vital to secure.  These domains have a larger impact on the overall set of domains.  As the environment is secured for people to self-organize around vital domains they are strengthen.  As these domains are strengthened it leads towards opportunity to strengthen other domains (figure 2). 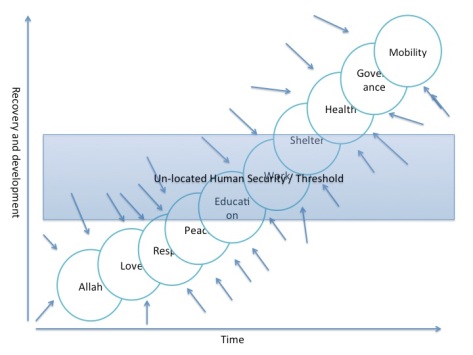 Conversely, if space (actors and attractors interacting) is not created in the vital domains and agents are confused as to how they are organizing for recovery it will be difficult to rise above the human security threshold (below).

Figure 3: Failure to self organize lack of resilience 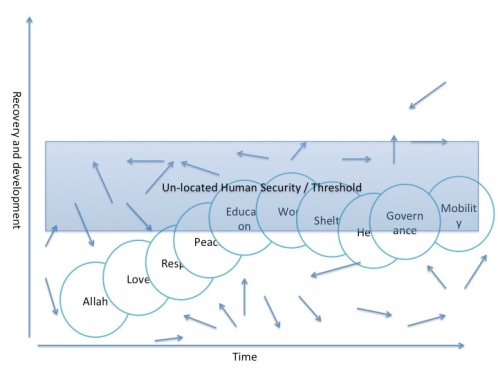 About the Author: Dr Matthew S. Will has over a decade of experience in International Development and Humanitarian Aid working and living in South East Asia and the Pacific.  He worked in Mindanao for eight years which is also where he completed his doctoral research.  This article is derived from research done in partnership with Sirat (a local NGO in Mindanao) and the University of the Philippines, Diliman.

Other Contribution:  To get feedback about complexity, disasters and capabilities I requested Steve Goudswaard to give me a peer review.  As usual his comments and questions were practical, thought provoking and helpful for the development of the article.

If you would like to talk to him about innovative ways for a partnering towards a flourishing society click here.   Other articles on Mindanao by Dr. Will include:

Note on ranking: The rank shown above was the perception strength for certain domains in a specific time and place. There are many factors that influence people’s decisions to rank or not rank in certain manners. For example the existence of a domain could make people rank it lower in importance because they do not feel a lack in it’s necessity. The above resilience framework is not static. Further to fully understand the framework it needs the accompanying narrative data.

Click here to see alignment of two of the highest ranked domains and tipping points (Islam and Respect).